The cemetery of St Johns in Parramatta is the oldest existing European burial ground in NSW.  It has a proud history of burials including 17 First Fleeters, soldiers, people from the highest ranks of society, convicts, early pioneers of agriculture, administrators, missionaries, and local business people of the district of Parramatta.

For the descendants of William Tunks and Sarah Lyons, the total number of ancestors whose remains lie in this cemetery is 46. There are 4 other burial remains related to Phoebe McRoberts (nee Tunks, Mobbs, Tomlinson). I would not be surprised if we found other family burials at St John’s as the Tunks family were numerous around the township of Parramatta for the first three generations.

Natalie Logan, TDAI Archivist, has extensively documented the history of the Tunks Family who are buried at this historic cemetery and has produced an eBook which you can download. 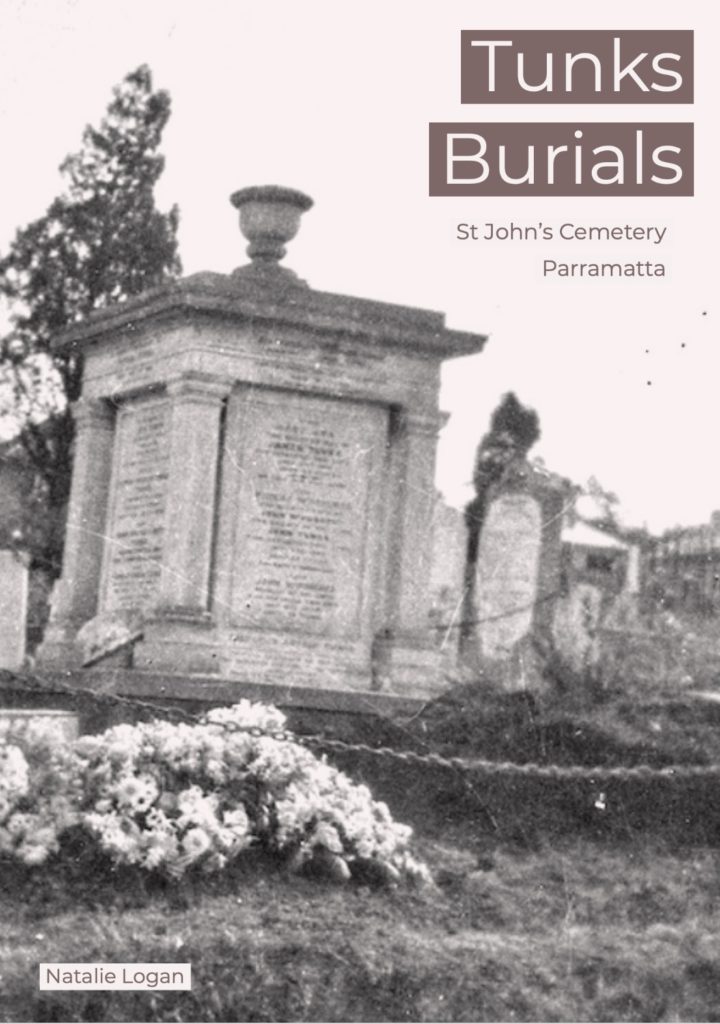 In 2018, TDAI embarked on a project to repair and save the Tunks Monument at St John’s Cemetery. We understand there are 23 descendants of John Tunks and Phoebe Tomlinson buried under this monument.

The monument had previously been restored by the Tunks Descendants Association in 1986. At that time the plaque for William Tunks was added to the Monument. 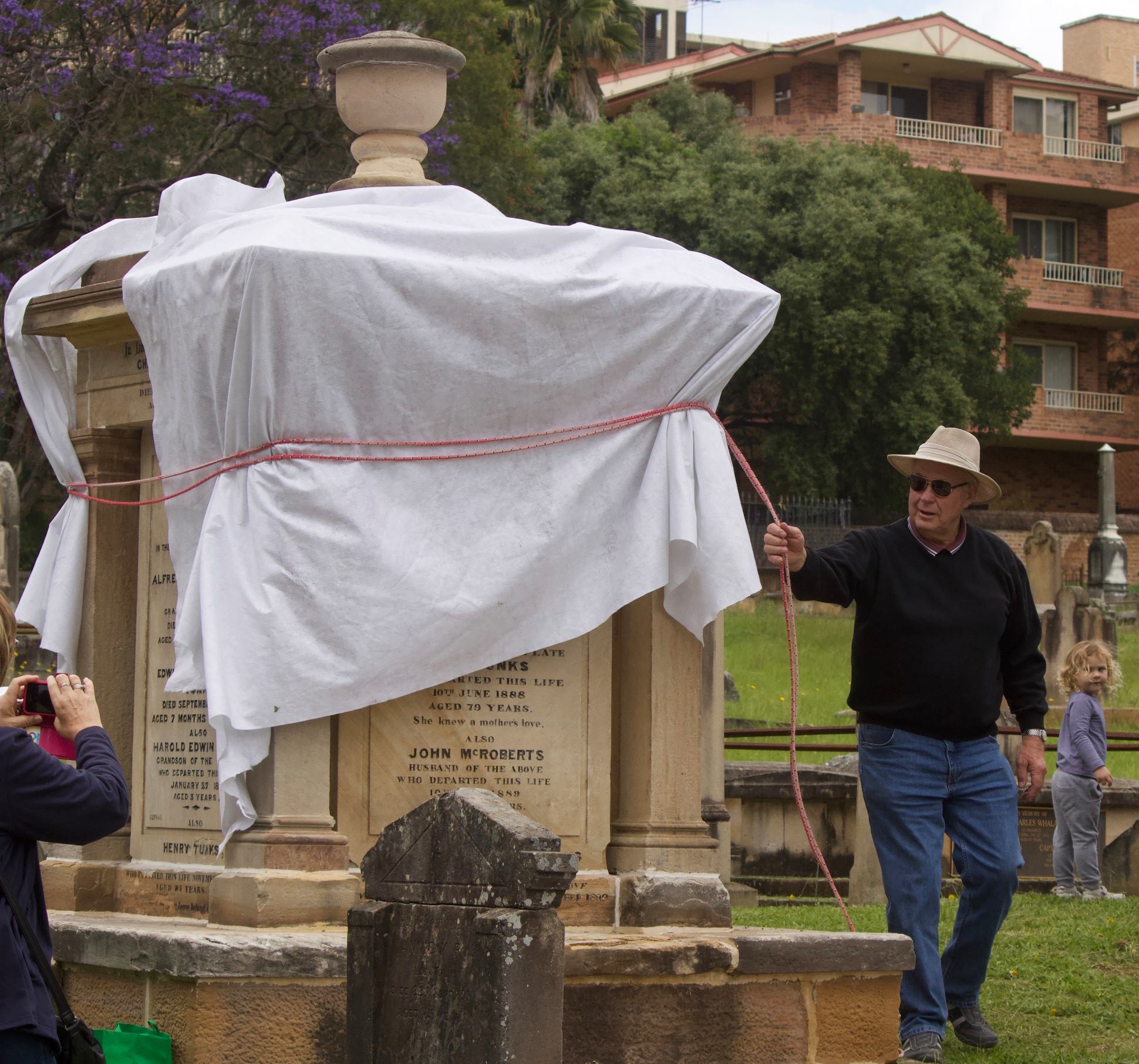 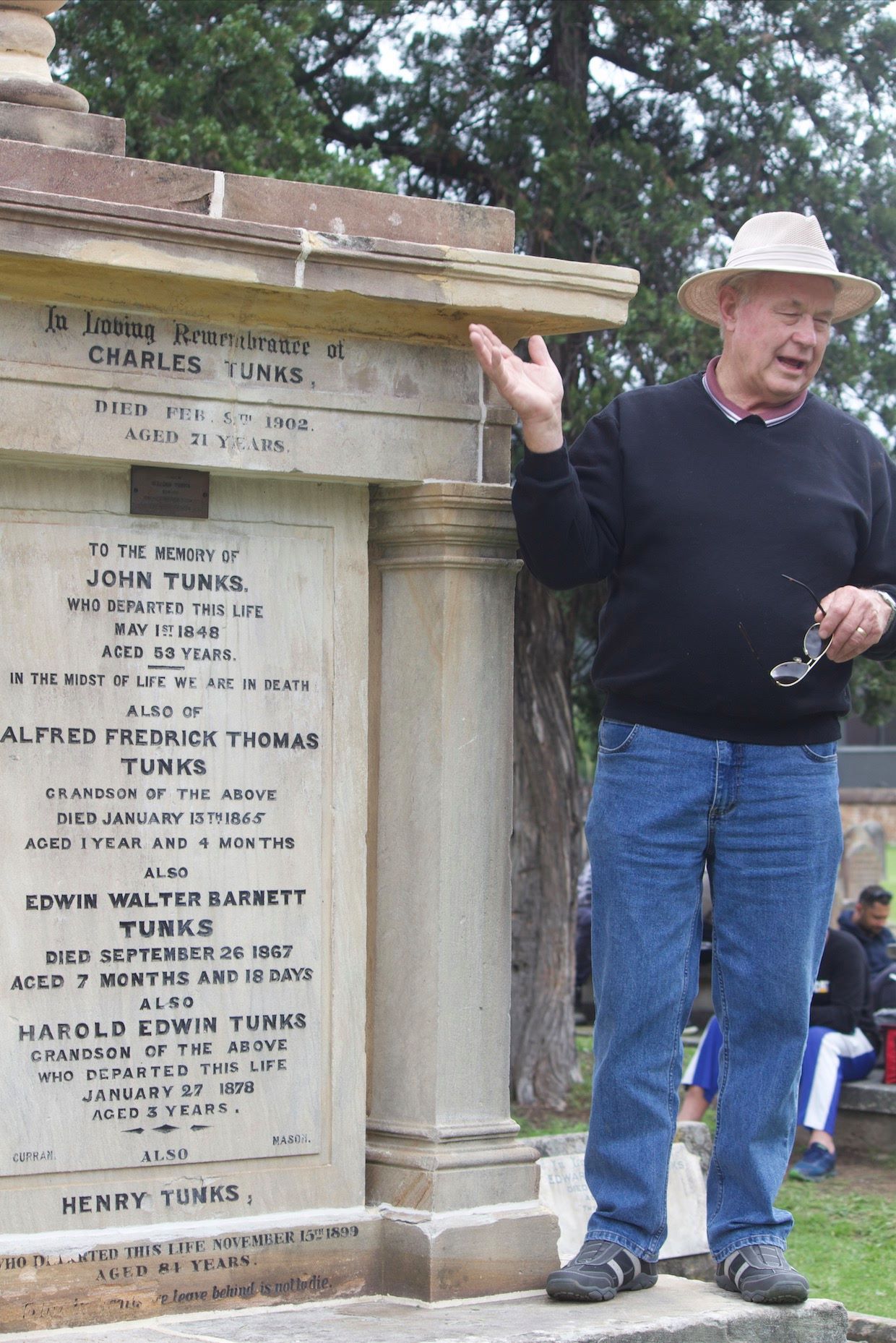 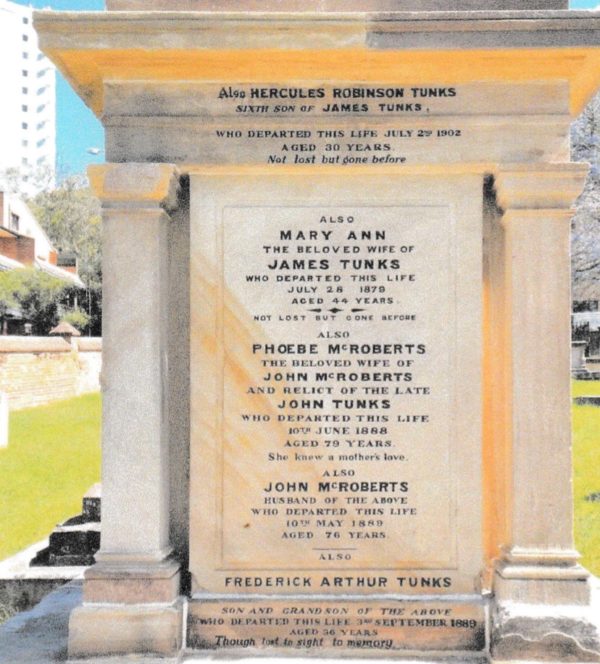 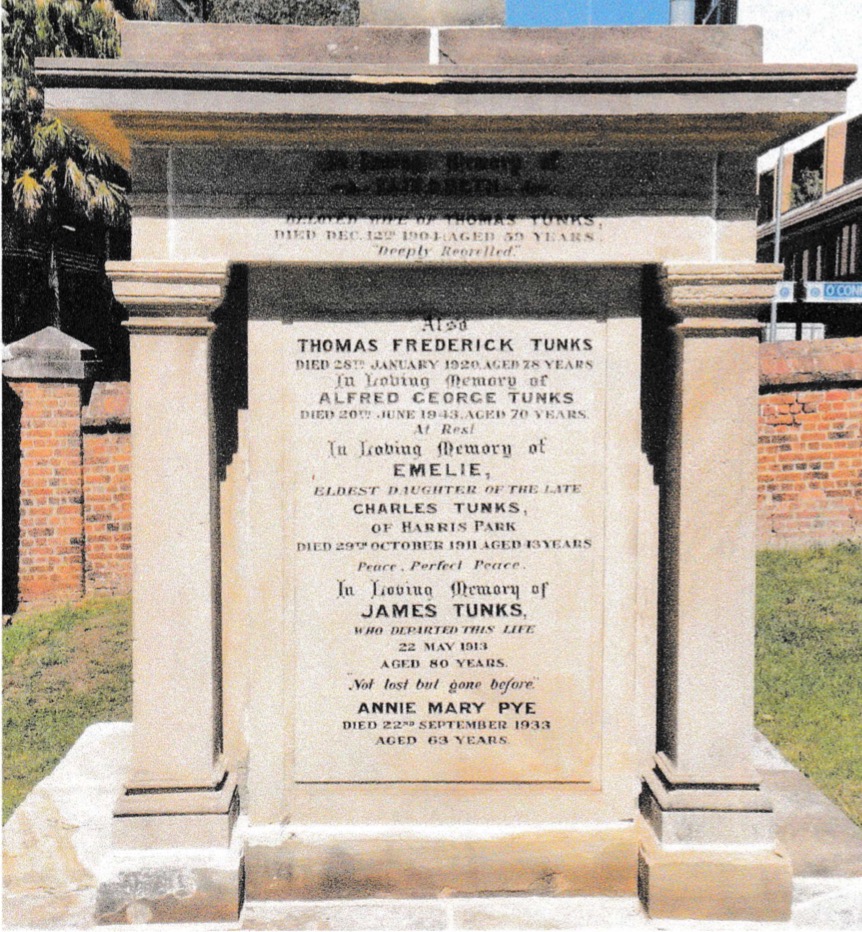 In 2018, as part of the restoration work on the Tunks Monument at St John’s Cemetery in Parramatta, Ken Tunks organised a TIME CAPSULE. It contained information about the Tunks Descendants Association and the restoration. It was inserted into the monument and who knows when it will be discovered. 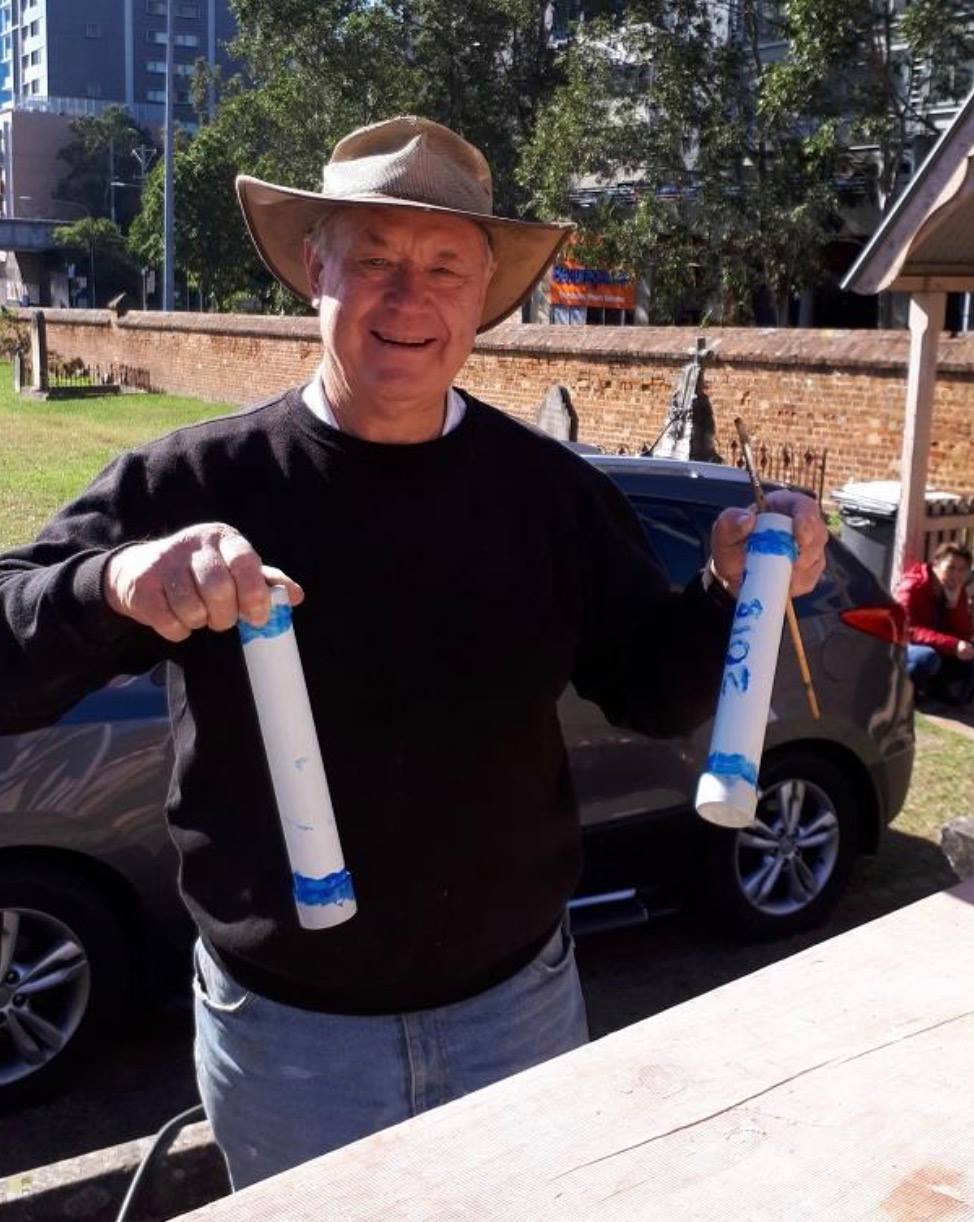 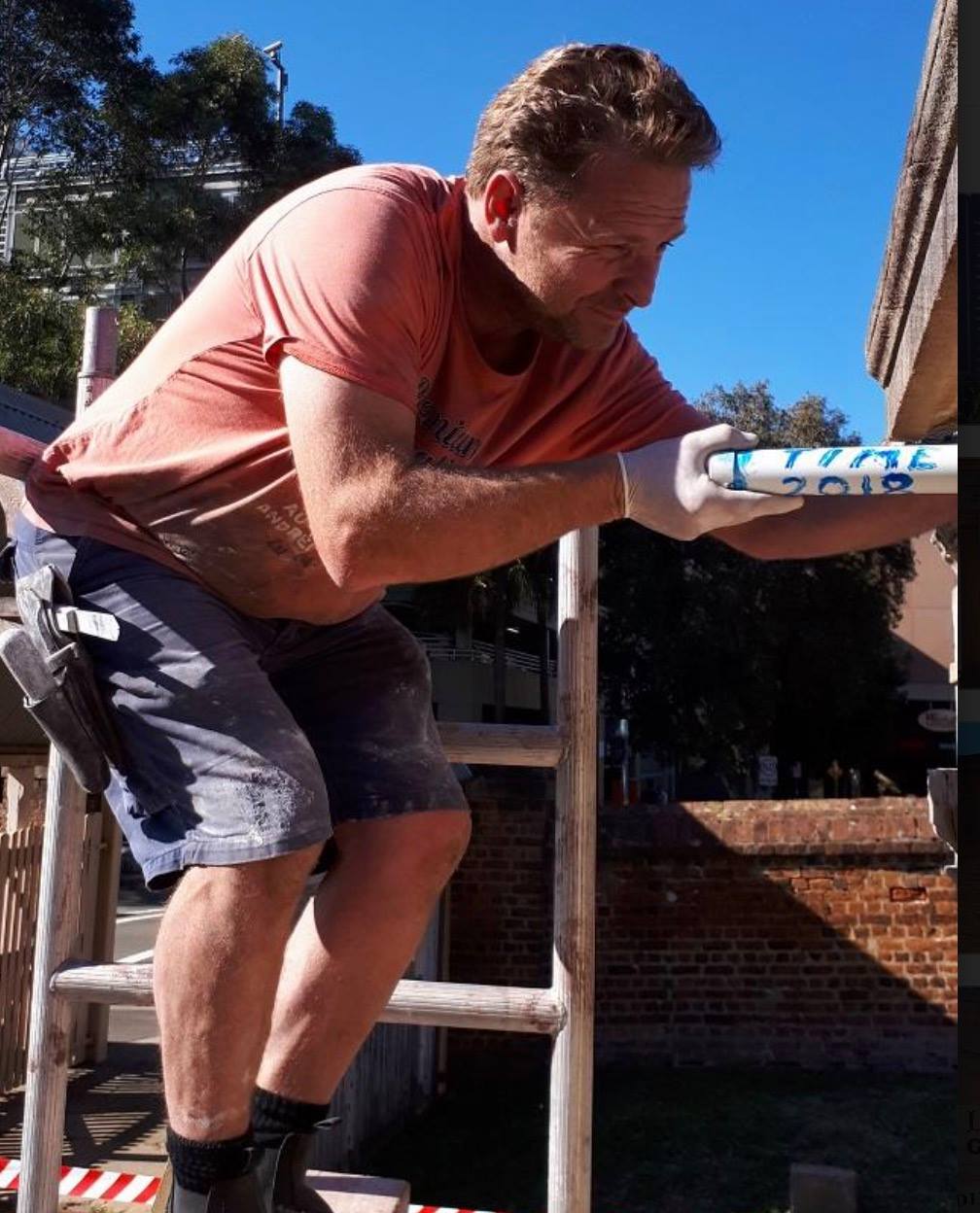 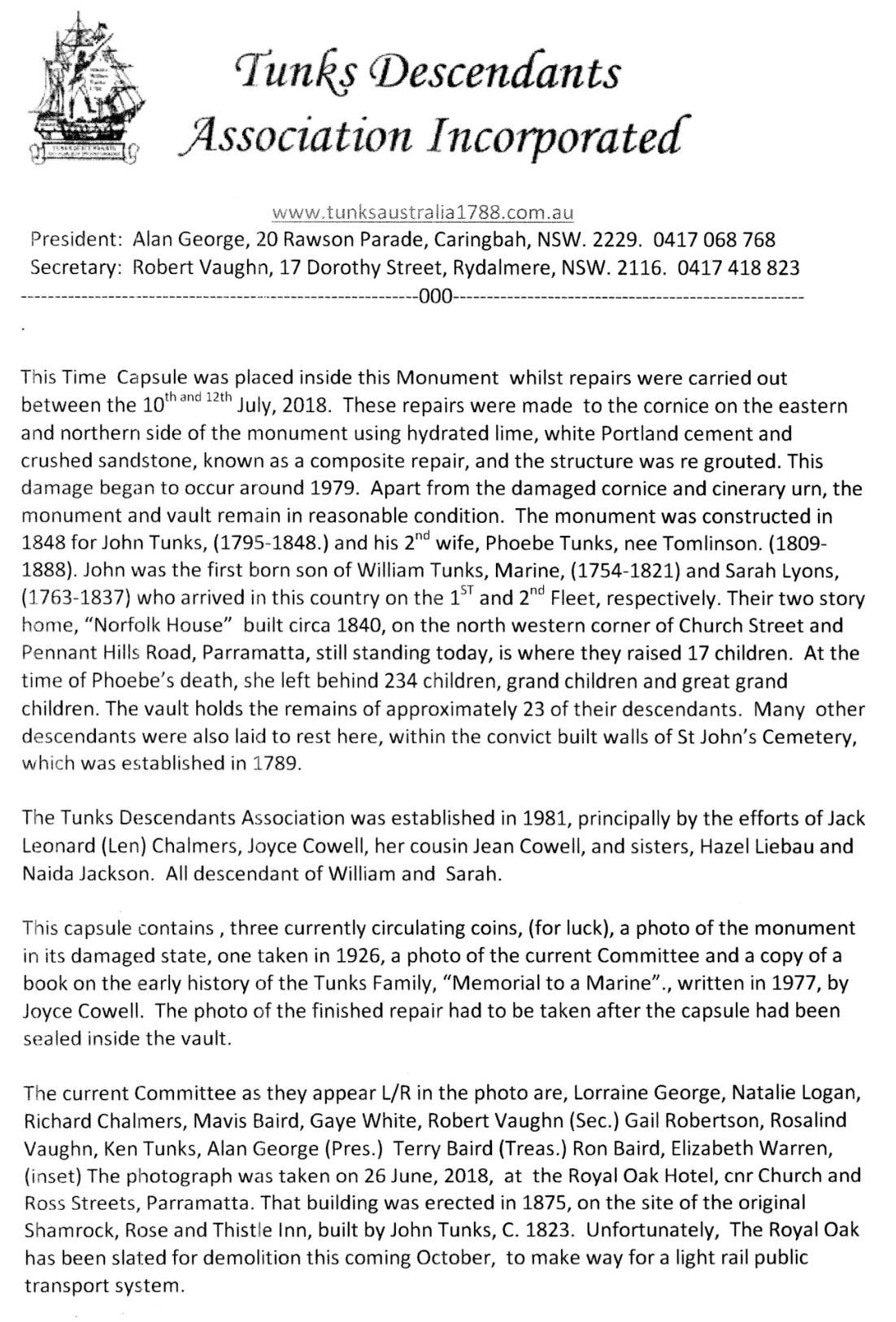 In 2015 we started the project to get all the information gathered about the Tunks Descendants up online, and the Tunks Ancestry Tree was started. This of course is an ongoing project and we would like family members to contact us with any changed family details so we can keep this information up-to-date.

If you have any photo of your Ancestors, could you forward them to us so we can add them to the tree.

Thank you to the people who have worked on this project: Ron Baird, Alison O’Sullivan, Natalie Logan and Gaye White 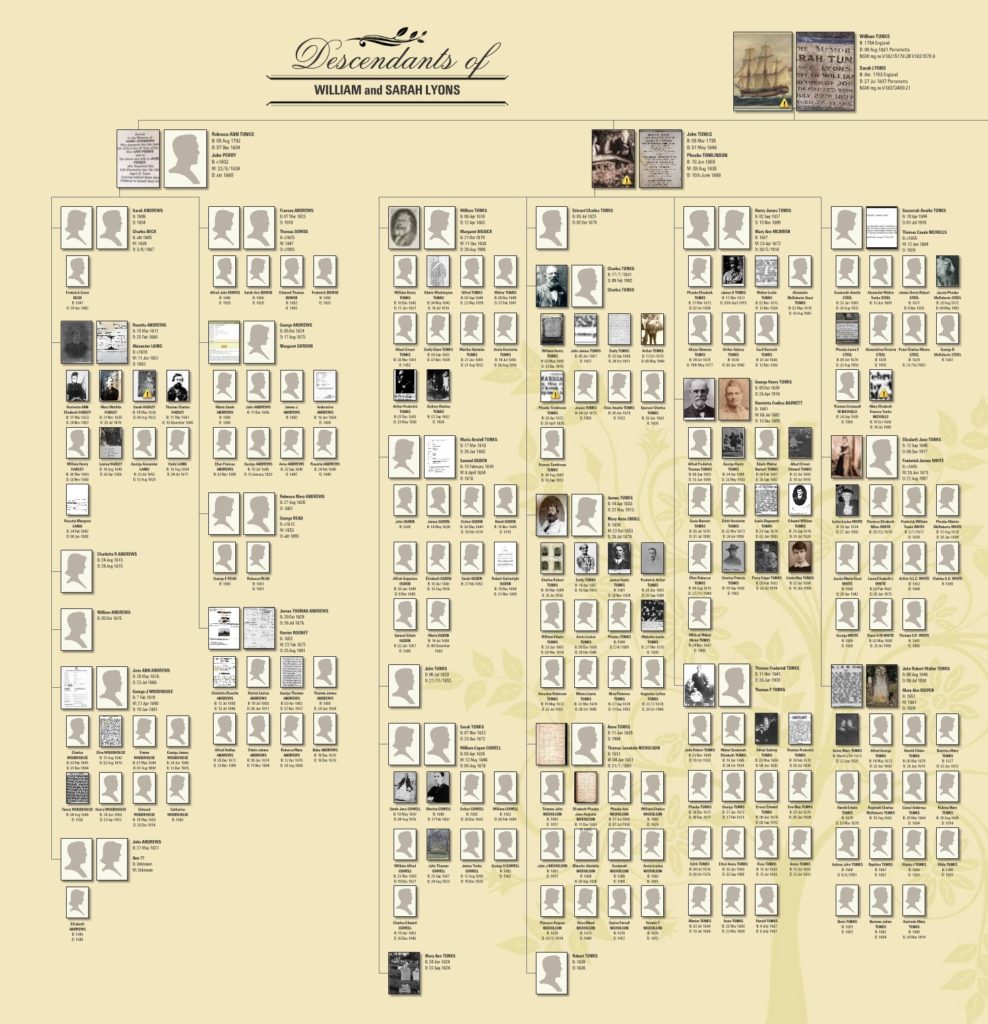 Memorial to a Marine

It has three sections, the first covering William Tunks and Sarah Lyons early life in Australia. The second, covering their children and the Third covers some of William and Sarah’s Grandchildren.

It was my distinct privilege to have first met Joyce in the early 1980s wten ljoined the Fellowship of Firct Fleeters.

At the time she was Archivist oI that organization, inwhich capacity she served so diligently for another 16 years.

We both had a common link being proud descendants ofa First Fleet Marine, \Mlliam Tunks and Sarah Lyons, aSecond Fleet Jewish convict” lt was through Joyce’sbook, “Memorial to a Marine” that stined me to delve deeper into our Family Tree.

Her commitment to her genealogical work, both lor the Fellowship of First Fleeters and the Tunks DescendantsAssociation set an example to many of us and her knowledge of History, particularly our own colonial history was indeed first rate. At all times she insisted on historicalcorrectness and rejected, as forcefully as only Joyce knew how, any sign of political correctness.

I had a deep and abiding respect for her judgment, but must admit there were a few times when we did not see eye to eye, and anyone who knew Joyce well, would no doubt corne up against an incredibly formidable opponent. 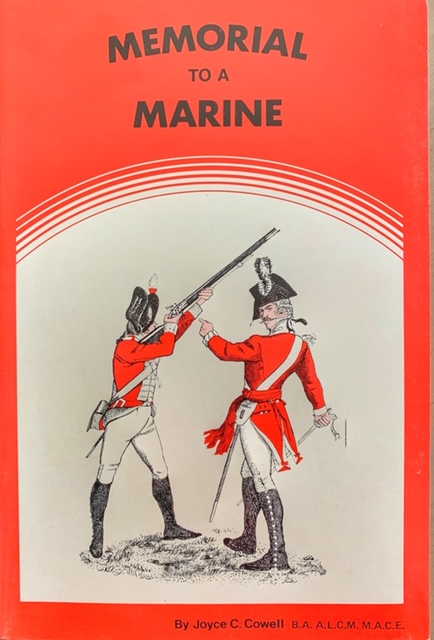 Memorial to a Marine 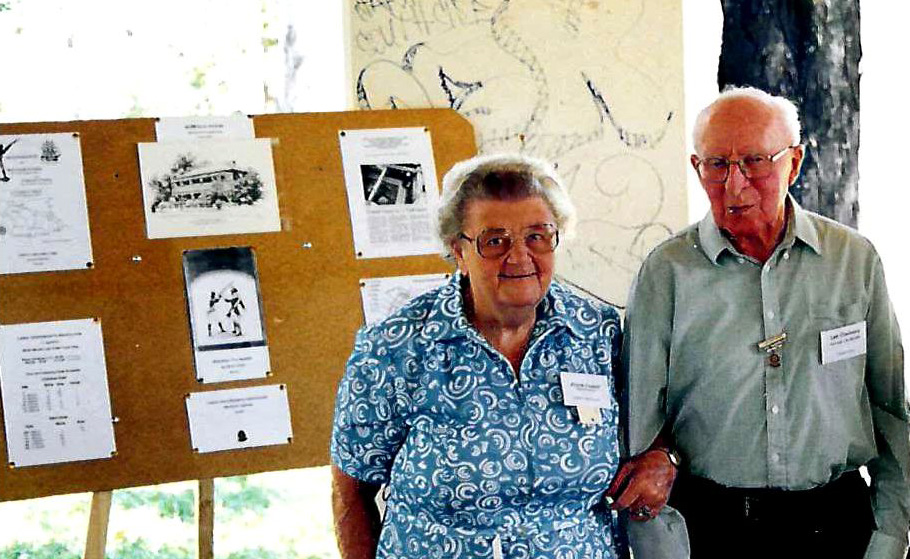 Joyce Cowell and Len Chalmers at the launch of Memorial to a Marine. 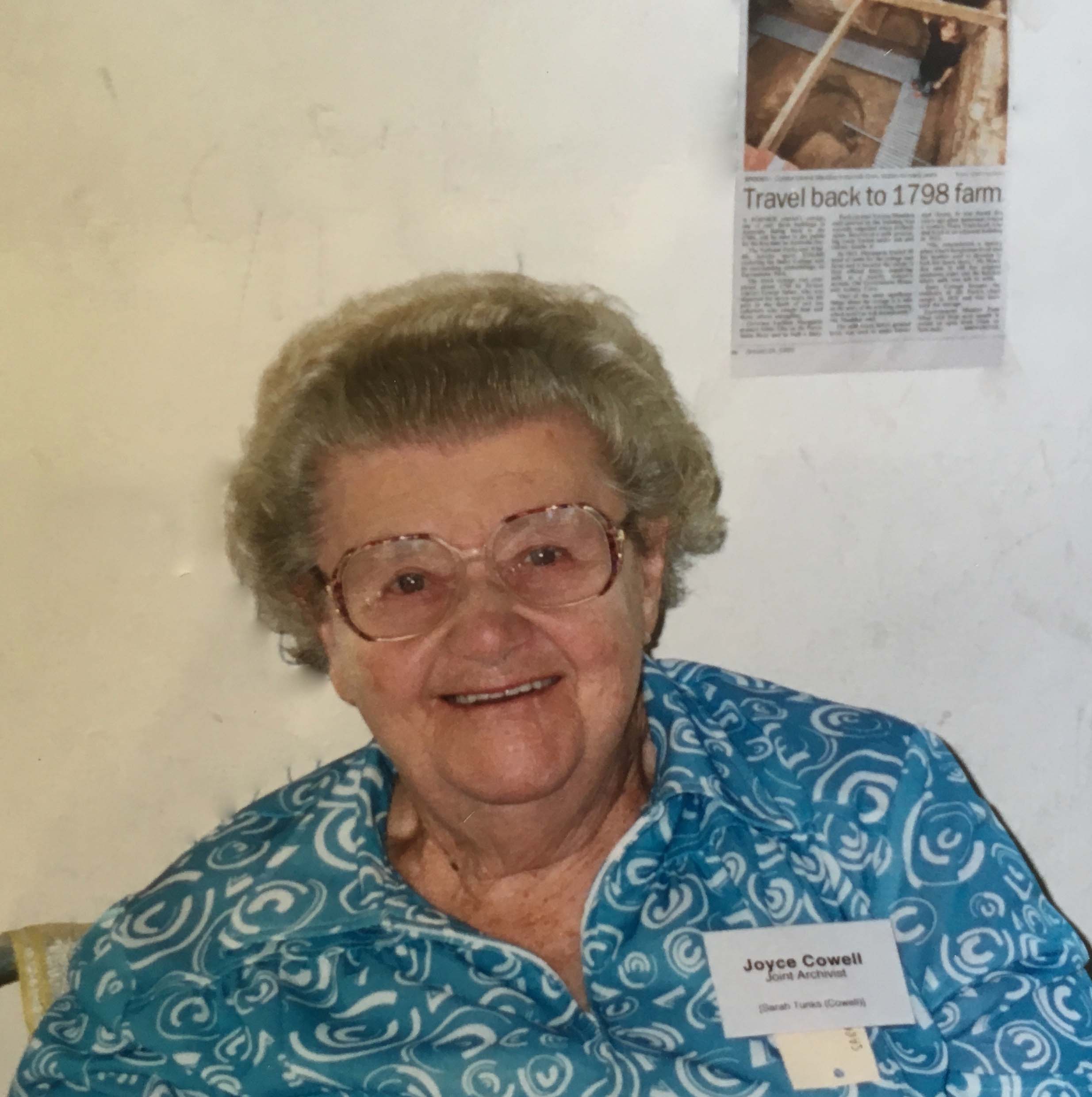 Author of Memoir to a Marine. The history of William Tunks, marine on the Sirius, and Sarah Lyons, convict and their children.

She certainly was a strong-minded character, though onesoon realized that her bark was much worse than her bitel!

I shall miss her encouragement and advice, indeed the two organizations that were so close to her heart, will be the poorer for her passing.

She was a proud mother, grandmother and greatgrandmother to her immediate family, but quite a numberof us considered Joyce the Matriarch of a much wider family, and we join you in the loss of a loved one.

We give thanks, Joyce, for your long and fruitful life and may you have eternal rest. To Live on in the Hearts and Minds of Descendants is Never to Die”

TDAI has erected several plaques on sites that are significant to the Tunks Family. 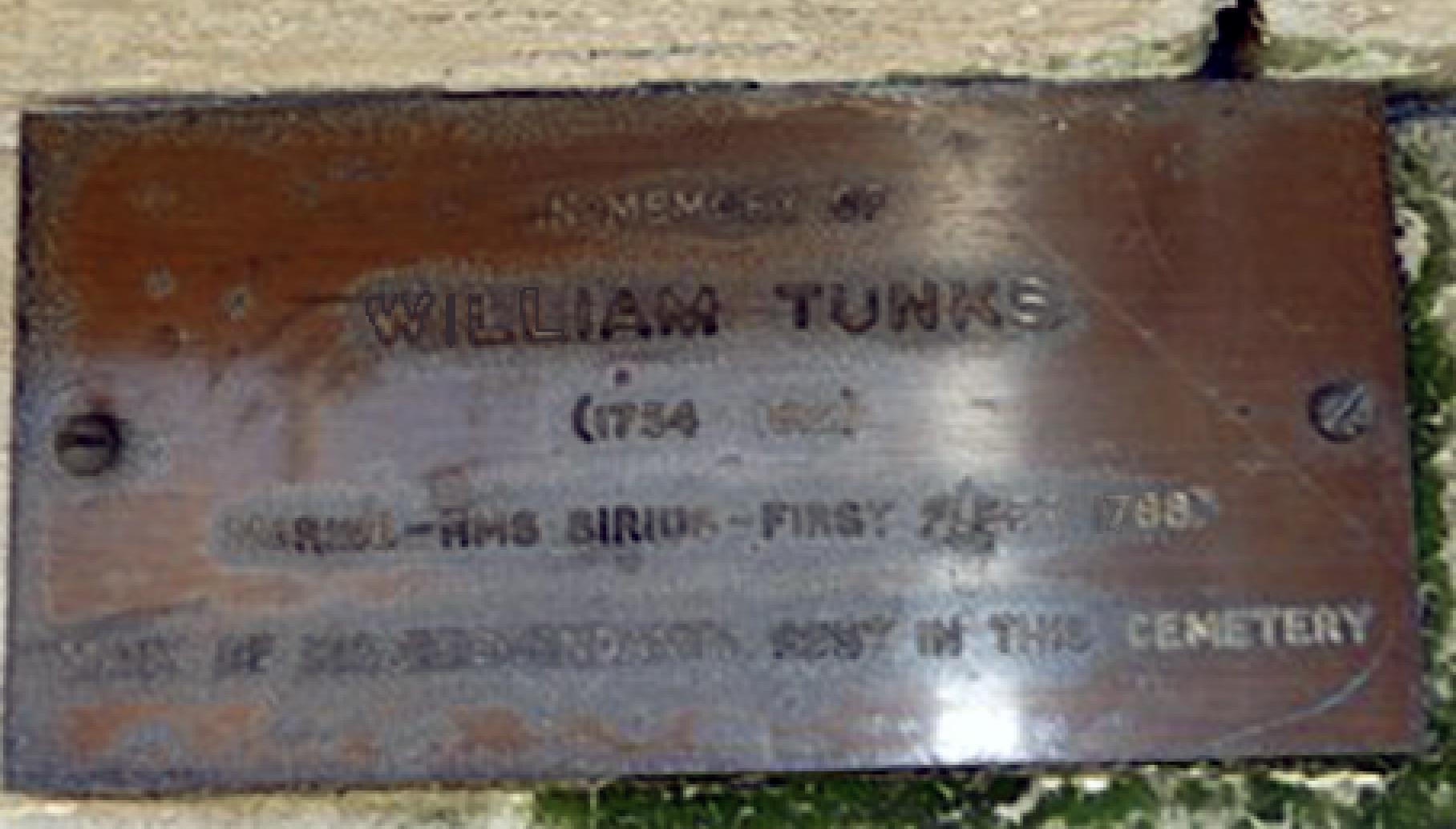 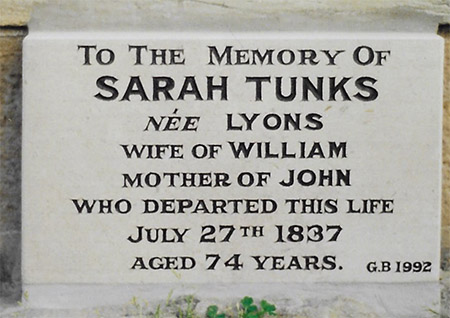 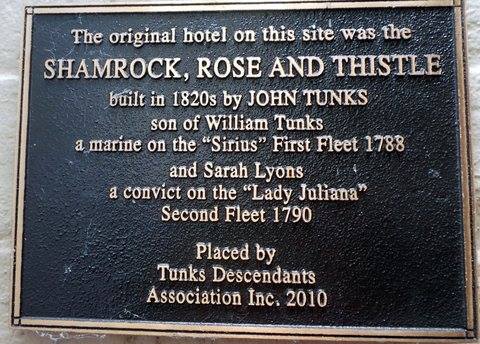 TDAI Plaque on Stables, Parramatta Shamrock, Rose and Thistle built in 1820's by John Tunks son of William Tunks a marine on the "Sirius" First Fleet 1788 and Sarah Lyons a convict on the "Lady Juliana" Second Fleet 1790 Placed by Tunks Descendants Association Inc 2010 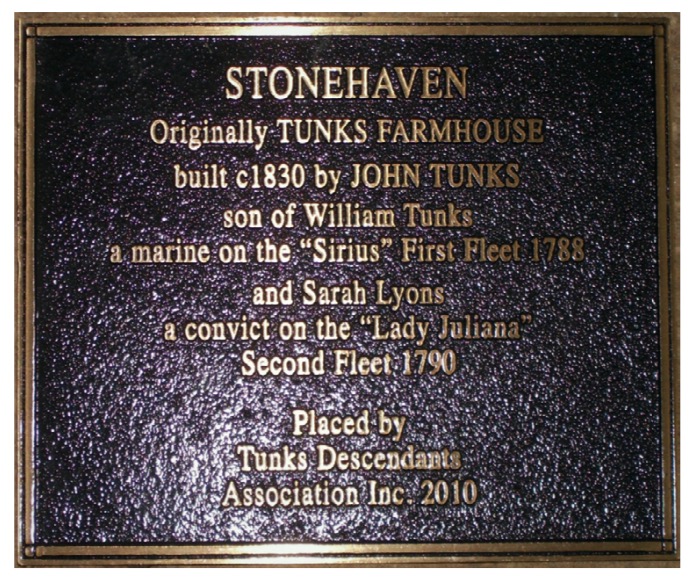 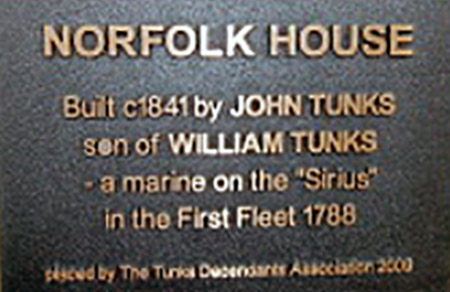 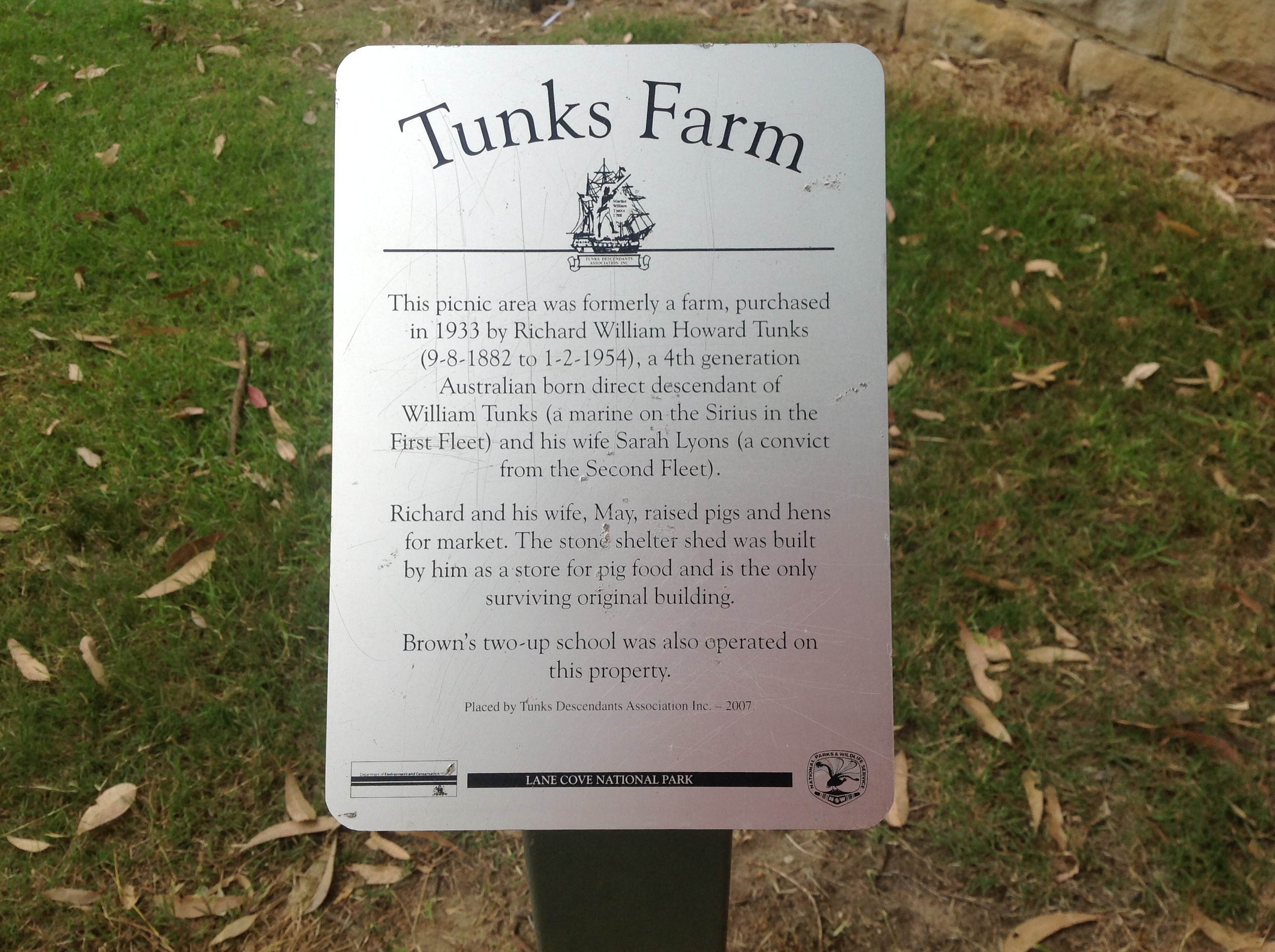 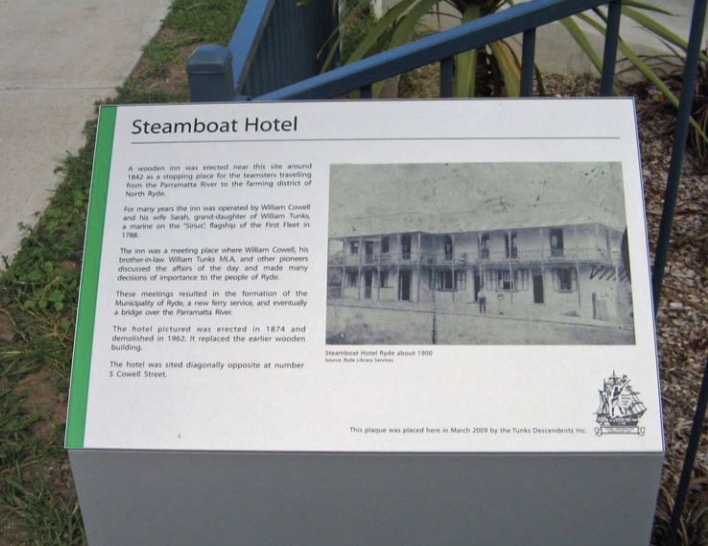 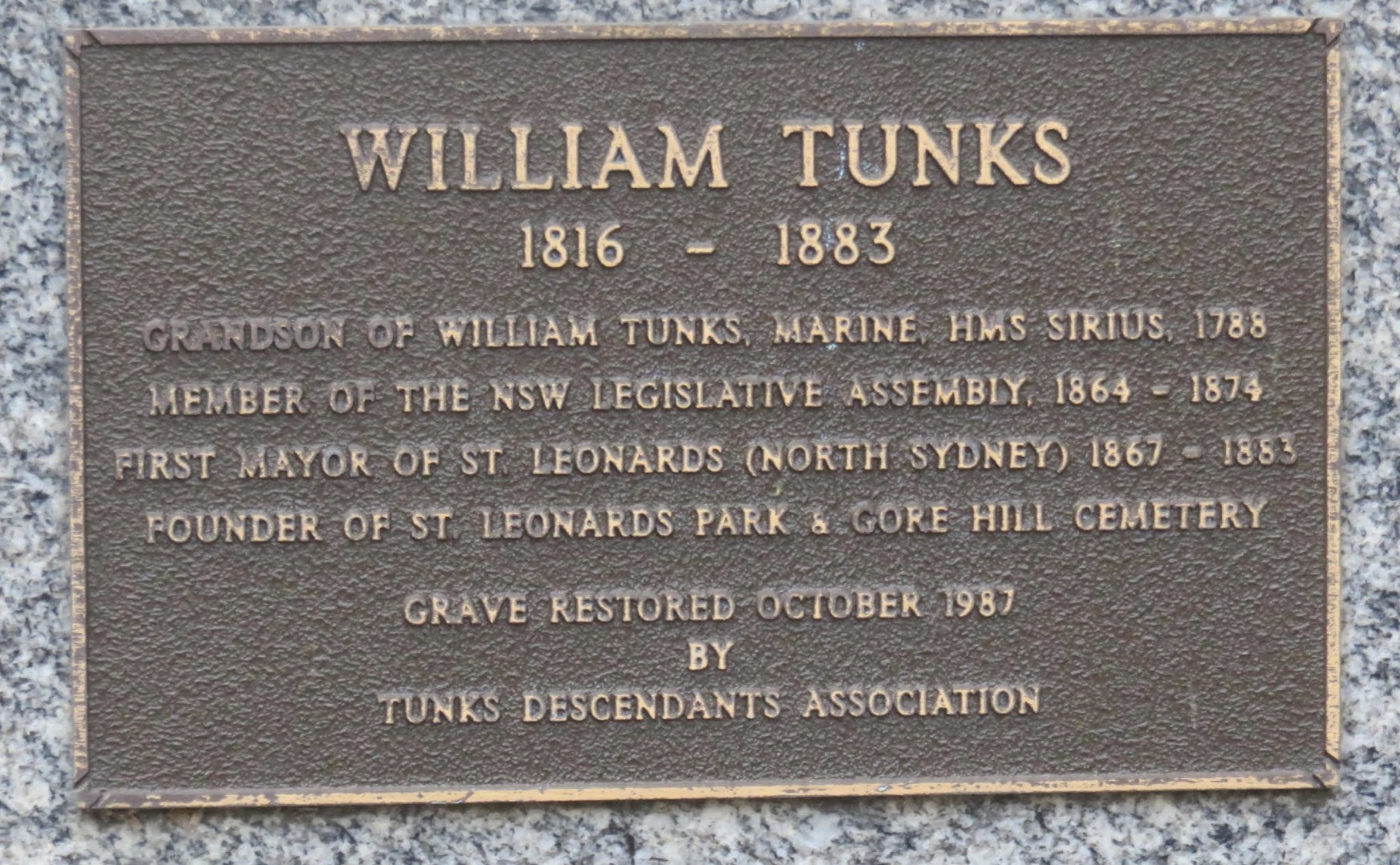 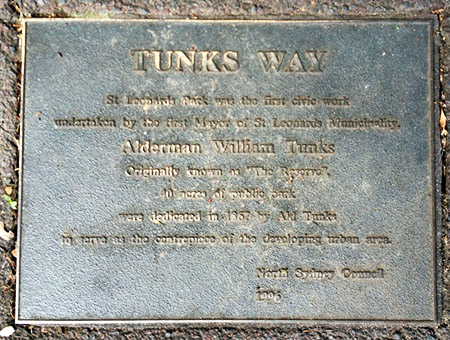 2014 marked 100 years since the start of the First World War.  The following descendants of William Tunks and Sarah Lyons fought in the Australian Imperial Forces during WWI 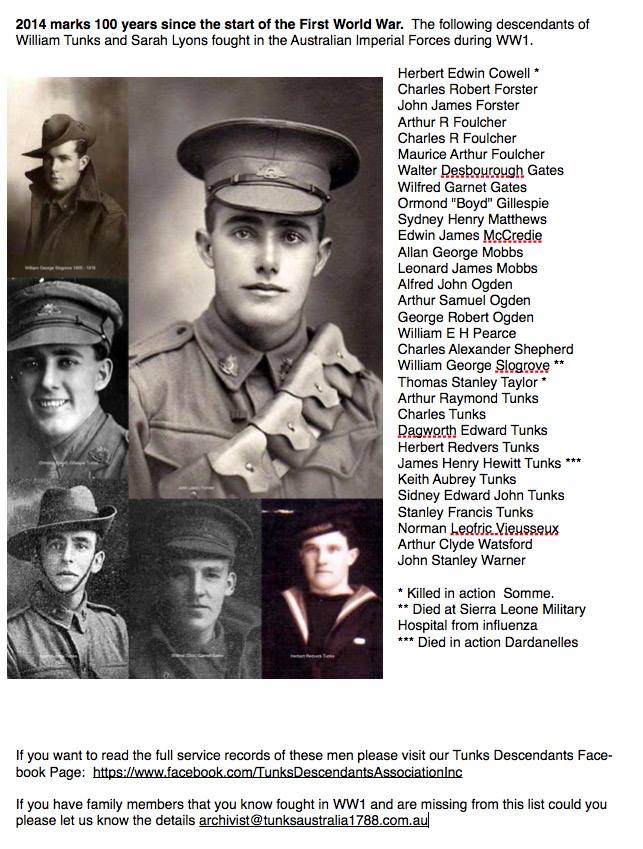 Tunks Descendants who fought in WW1

The Tunks Descendant Association is analysing DNA results of descendants to help us learn more about William Tunks and Sarah Lyons before they came to Australia.

There has been much discussion about whether William Tunks was a German mercenary who fought for the British in the American War of Independence. Commonly known as Hessians because the vast majority came from the principality of Hesse-Cassel.

A Tunks’ male has undertaken Y-DNA test. The Y-Chromosome is passed from father to son. This direct male descendant of William Tunks is in the haplogroup I-M253.

The haplogroup reaches its peak frequencies in Sweden and western Finland. In terms of national averages, I-M253 is found in 35–38 per cent of Swedish males, 32.8% of Danish males, about 31.5% of Norwegian males, and about 28% of Finnis males.

Haplogroup I-M253 is a primary branch of haplogroup I (I-M170), which has been present in Europe since ancient times.

Obviously, there is a limit to what we can confirmfrom these results but it certainly strengthens the theory that his family line was Northern European.

We would be very interested to hear from anyone with more information or details from other descendants who have taken DNA tests.

H1 is the most common branch of haplogroup H. It most likely originated 15-20,000 years ago and represents 30% of people in haplogroup H and 46% of the maternal lineages in Iberia. It can also be found at significant frequency in the Near East and some Middle Eastern populations. 13-14% of all Europeans belong to this branch.

This is additional evidence that Sarah Lyons was a Sephardic Jew whose maternal line came through the Iberian peninsula.

In 1986, the First edition of the Tunks Family Tree was published.  The original tree was compiled by Len Chalmers with the help of his daughter Meg Burns.  When it came to update the tree the computer discs containing the information were found to be corrupted.

Marian Perrem took on the project of entering the tree into a program called Brothers Keeper.  She not only entered  and revised all the original entries (some 6000 names) but investigated all new incoming information and  upgraded numerous branches of the family where there had previously been large gaps.

The second version of the up-dated Family Tree was launched in 2001 with the Founder, Len Chalmers, there to witness Marian’s mammoth effort.  In 2004, Marian issued yet another update.

Marian was awarded a life membership as a recognition of her work for TDAI.

The Australian National Maritrme Museum is constructing a “Welcome Wall” at Pyrmont, on the shores of Sydney Harbour, The wall will featurenames of immigrants engraved on bronze panels. A computer database and web page will bring to life the history of the names which appear on the wall. This database will be accessed within the National MaritimeMuseum and via the Internet.

The Tunks Descendants’ Association have registered the name “Tunks”,and the plaque on the wall will read “TUNKS William and Sarah”. Our plaque will be among the first on the wall, and will be unveiled at a special ceremony in September 1998. 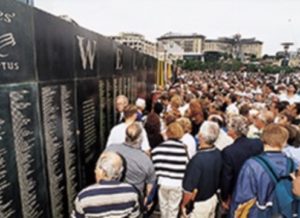 In 1991 the committee commenced efforts to secure permission to affix plaques to the Family Vault in St John’s Cemetery to honour Sarah Tunks (N.Lyons) and Elizabeth White.  Each was buried at St John’s but there is no trace of grave or headstone.  In 1992 a Headstone was erected to Sarah Tunks. 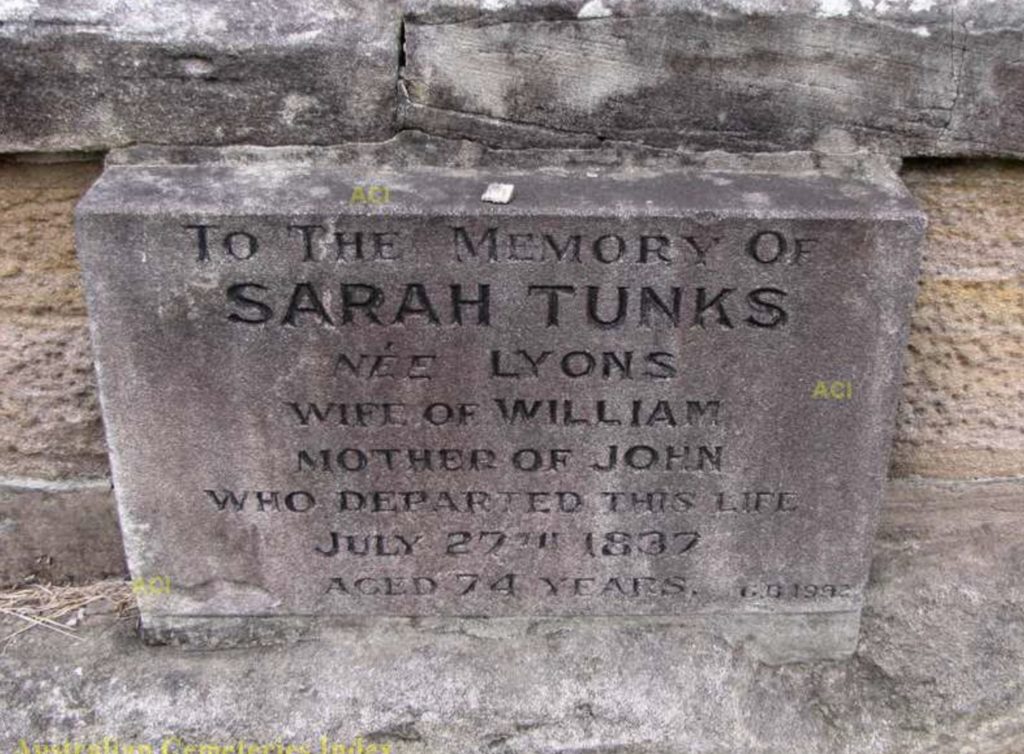 The grave of William II is in fairly good condition whilst that of his eldest daughter Elimy Clara McLean and several other kin are in a somewhat sorry state – Emily was interred at Gore Hill on November 8 1934 and it was of interest to note that her 7th child and 2nd son is also buried there.

At St John’s, we looked at the condition of several Tunks Plots – three in particular are of vital historical importance to family members – these are:

Sarah Tomlinson – life of Robert and mother of Phoebe Tunks (Mobbs).  Sarah arrived on the Glatton 1802, sentenced to 7 years transportation for stealing.  She was born in Bristol and died in Parramatta.

Mary Ann Tunks infant daughter of John Tunks and Esther Arndell.  She died in 1824 shortly after her birth on 24 June 1824. 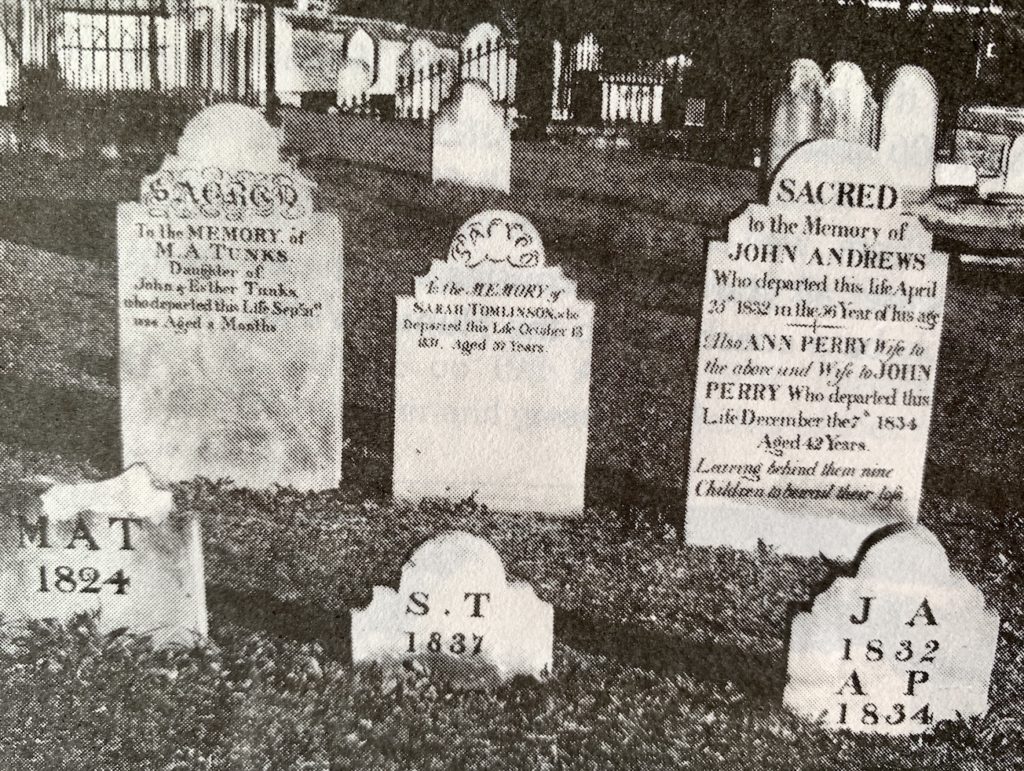 Following the inspection, a small working party cleaned up the relevant graves at Gore Hill and a contract was let to have headstones repaired at St John’s.

We are still trying to secure permission to affix plaques tp the Family Vault in St John’s to honour Sarah Lyons and Elizabeth White.  Each was buried at St John’s but there is no trace of grave or headstone.

Len Chalmers and Dudley Tunks have been putting in some good work on the cleaning and restoration of the grave in Gore Hill Cemetery of William Tunks II and his wife Margaret.  They have cleaned up the weeds and painted the iron work and are now organising the levelling of the fence and the painting of the inscriptions.

In 1983, the TDAI Committee agreed to investigate the desirability and feasibility of restoring the monument surmounting the family vault in which John Tunks and some 20 of his descendants were buried between 1848 and 1920.  The committee sought a quotation from stonemason Mr N A Hopmeier.  His quotation of $5,380 seemed to be beyond the our means at the time and the matter was shelved pending further discussion.

We now await the mandatory approval of the Heritage Council for the restoration now estimated to cost about $3,500 for a modified plan than proposed by Mr Hopmeier. 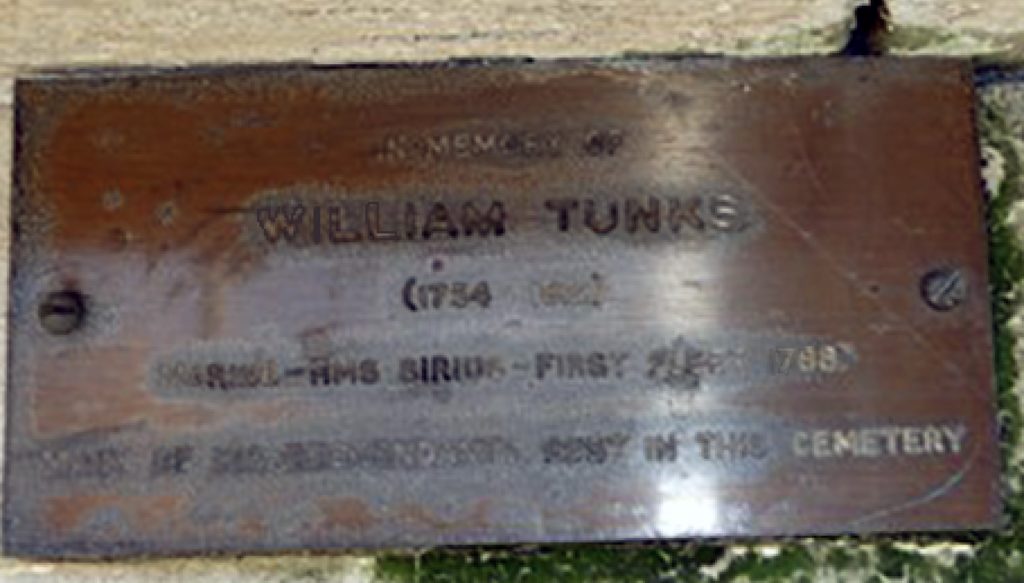 A family picnic was held in 1986 at Tunks Farm, Lane Cove National Park where a sum of $1,396 was raised which went toward the restoration project and work was commenced.   On 19 October 1986 a picnic was held at Parramatta Park before family members moved to St John’s Cemetery where Len Chalmers unveiled the Queen Anne Flag revealing the restored family vault and in addition  a memorial plaque to the founder of our family in Australia, William Tunks, marine, Sirius 1788.