Len published a book in 1986 “Descendants of William Tunks and Sarah Lyons – A Family Tree”.  Joyce Cowell and Peter Christian were also generous contributors to the book’s content. Len was elected inaugural President of the Association and remained so for several years.

Jack Leonard Chalmers was born in Croydon, Sydney in 1908. His father, a Bank Manager, was transferred to Dubbo to open a new branch of the Savings Bank of NSW, where Len went to primary school and developed friendships with local families which lasted  all his life.

The family left some real marks in Dubbo. His father founded the Dubbo Tennis Club, was dominant in the Country Tennis  Association and later became Vice-President of the NSW Lawn Tennis Association of White City with which he was associated for 40 years. His sister. Morjorie, was Dux of Dubbo High School and Len himself was Dux of the Public School.

The family moved back to Sydney in 1923 and settled at Vaucluse in the Eastern Suburbs with Len attending Fort Street Boys High School until he joined The Colonial Sugar Refining Co.Ltd. (now CSR Ltd.). He trained as an industrial Chemist both at Head Office and Pyrmont Sugar Refinery. After graduating, he was transferred for a short time to CSR’s Condong Sugar Mill on the north coast of NSW, then on to Ba Sugar Mill in Fiji in 1928.

It was here he met and eventually married Margaret Rogg, one of five daughters of a prominent self-made business man, Hugh Ragg, who was later knighted for  his contribution to Fiji’s political beginnings and his charitable gifts to Fiji’s orphanages.  Len and Margaret moved to Lautoka where they started a family of 3 boys and a girl, where Len continued his work as Statistical Chemist and Agronomist experimenting on soils and cane varieties that best suited the vastly differing cane fields surrounding Fiji’s 5 sugar growing districts and mills. Len held the position of Mill Manager of Penang and Nausori and lastly as CSR’s Fiji Manager before moving back to Sydney in 1960 with the whole family due to Margaret’s deteriorating health requiring hospitalisation. The family settled in Lindfield on the North Shore, during which time Len continued his work with CSR as their Chief Technical Field Officer of the Sydney Head Office until his retirement in 1970.  Margaret’s health deteriorated further and died in 1974.

After Margaret’s death, Len took a closer interest in his daughter’s Meg’s family  and lived in a specially built flat above her Roseville home. It was only when his sister Marjorie died a few years later that he became interested in their Mother’s family history (Alice Tunks) which he had initially scoffed at but decided to pursue when he found some sketchy papers amongst her affairs.  He searched all the Birth, Death and Marriage records he could, then wrote to hundreds of likely family members in the hope of finding true descendants. It was at this time he joined the newly founded Fellowship of First Fleeters and whilst working there 2 or 3 days a week on a voluntary basis, he found he worked with 4 other members who were quite by chance also Tunks descendants and was able to piece together a credible family tree. In 1981, Len and the small Tunks descendants group organised the first Tunks descendants gathering-picnic at Parramatta Park which was attended by about 100 people. Here he prepared and displayed the family tree, which was largely added to, and membership grew to almost 500.

In appreciation of his helping hand with her own family, Meg volunteered to assist him with compiling onto a computer the family history initiated by Frederick Daniell, (a foundation member and early President of The Fellowship of First Fleeters and father of a future President of TDAI, John Daniell).

Len published a book in 1986 “Descendants of William Tunks and Sarah Lyons – A Family Tree”.  Joyce Cowell and Peter Christian were also generous contributors to the book’s content. Len was elected inaugural President of the Association and remained so for several years whilst maintaining a continuing and contributing interest in the Association until Meg’s untimely death in 1990 which took its toll on his health.

While living a quiet life in a Lindfield retirement village,  he continued to take a keen interest in the happenings of the Association and the re-writing of his book, being so capably carried out by Marian Perrem, who did  a splendid job with updates amassing to some 6,000 names.

Len, at the age of 93,  addressed  the Family at the  AGM /Picnic Day at Parramatta Park where he launched the revised version of his book both in print and on CD. 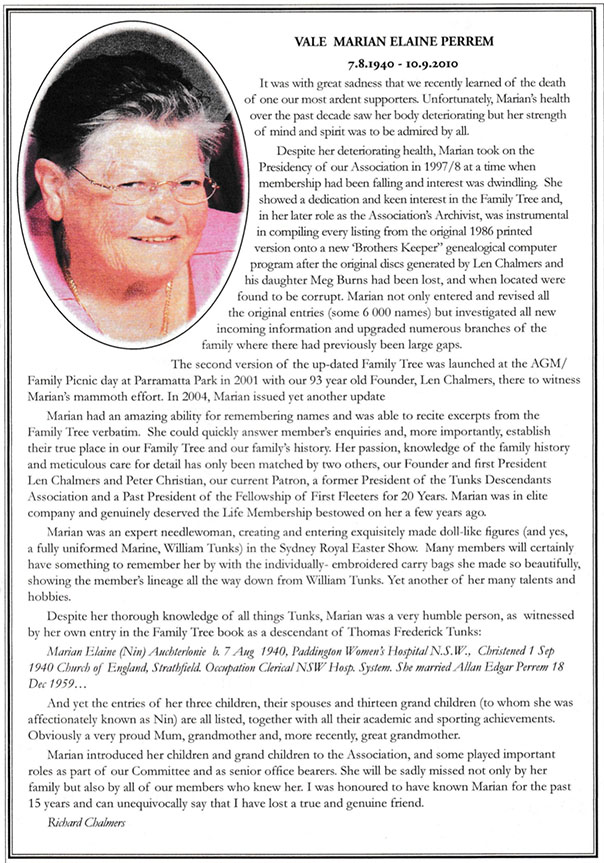 By an unanimous vote Marian was made a Life Member of TDAI. Marian has always been an enthusiastic member of the association and has held with distinction the positions of President, Vice President, Secretary and Archivist. Over the past few years as Archivist she has given an immeasureable amount of time and energy to the keeping and validating of our family tree records. She has been responsible almost single handedly for the production of the 2001 and 2004 editions of the family tree book and has checked our records pre 1910 for accuracy from the latest available data bases.

Unfortunately Marian’s health led to her retirement from the committee and this important position of Archivist.

Congratulations and thank you, Marian. 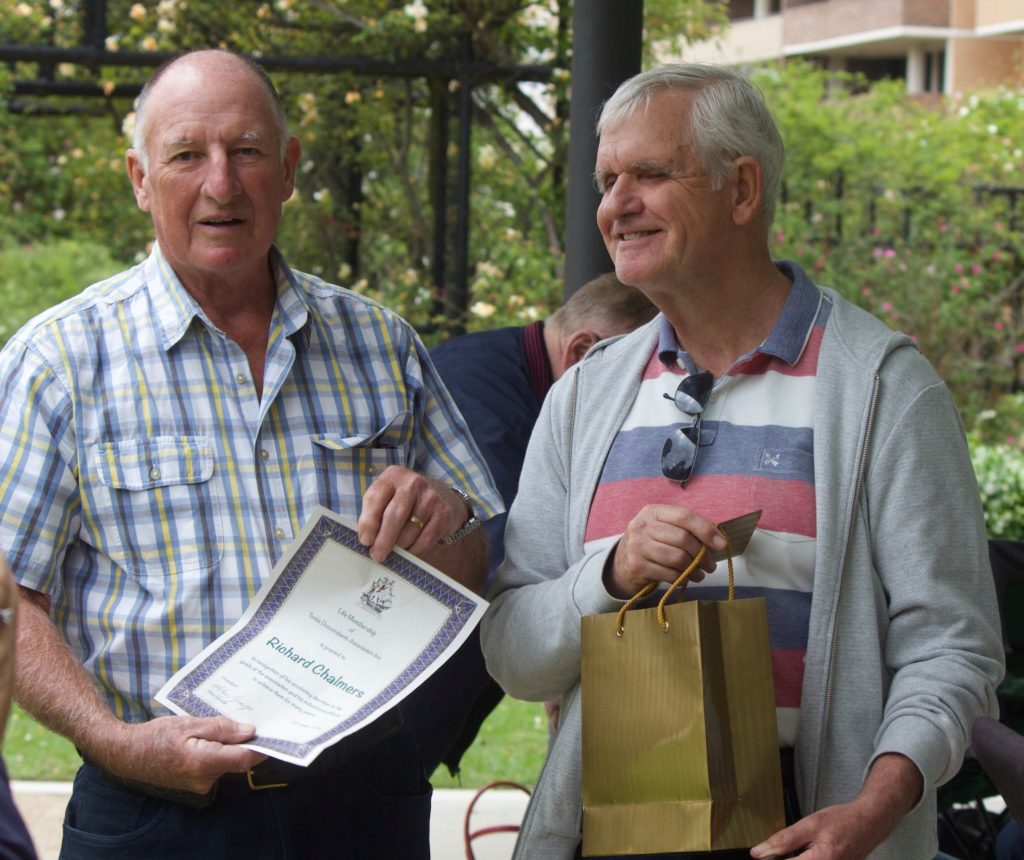 Congratulations and a huge THANK YOU to Richard Chalmers who was awarded Life Membership of the Tunks Descendants Association.

Richard’s father, Len Chalmers was one of four founding members of the Tunks Descendants Association.
Richard has been a member since 1981 and has held the office of President and Tunks Talk Editor
He has been Secretary and Public Officer for 19 YEARS!!

Our president, Alan George, presented Richard was with a certificate and a Tunks Association commemorative glass to thank him for his amazing efforts over the years.

“When I returned to Sydney in 1978 I saw my Father, Len, labour long hours over the Tunks Family Tree with the assistance of several Tunks Volunteers at the offices of the Fellowship of First Fleeters.

The Tunk’s Descendant’s Association Inc. finally inaugurated in 1980, with Len as their first President. By the Bi-Centennial in 1988 there were hundreds of members all anxious to find out if they were descendants of Convicts or Free men.  Sadly, Len passed away in 2004 aged 96 but I have tried over the years, to continue his legacy with stints as the President and the Tunks Talk Editor, but mainly Secretary and Public Officer for the past 10 years, in order to help keep the Association alive and thrive with the able assistance of many dedicated Committee Members”.  Richard Chalmers 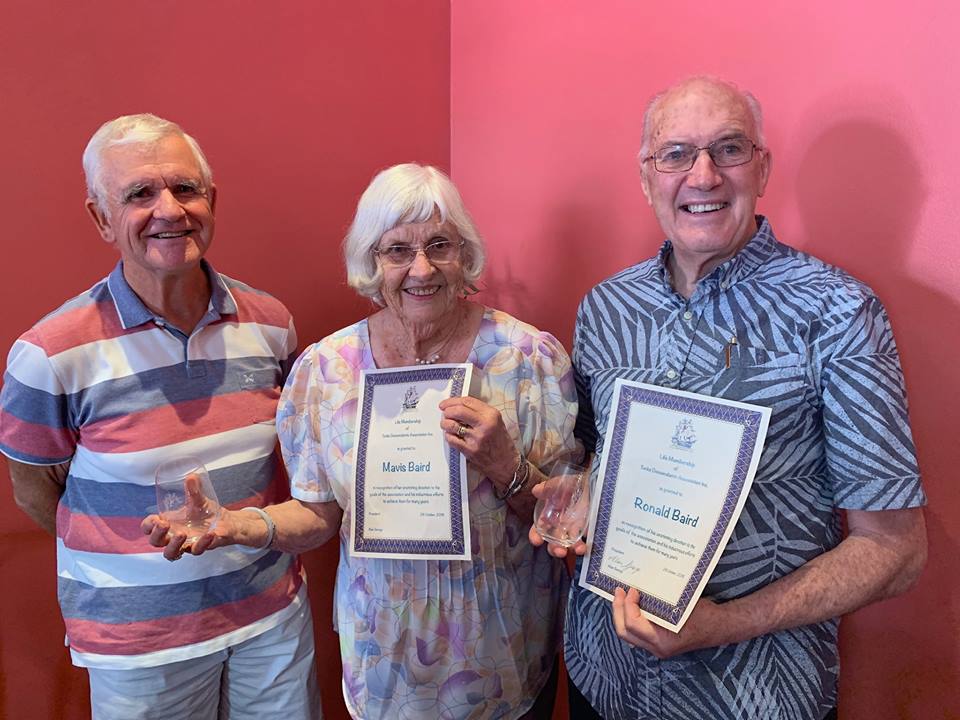 A huge thank you and congratulations to Ron and Mavis Baird who have been awarded Life Membership of the Tunks Descendants Association in appreciation of their dedication and service over many, many years.

Ron joined the Association when it was formed at the big Tunks Gathering in Parramatta Park. He lived in Cooma and couldn’t take a more active role until they moved to Sydney.

Mavis also managed a special project for TDAI namely the the placing of plaques on important sites connected to the Tunks family history. Getting permission to place this plaques was a very time consuming exercise.

Mavis and Ron were presented with their Life Membership Certificate and a commemorative glass by TDAI President, Alan George at the Royal Oaks Hotel on Tuesday 26 March 2019.