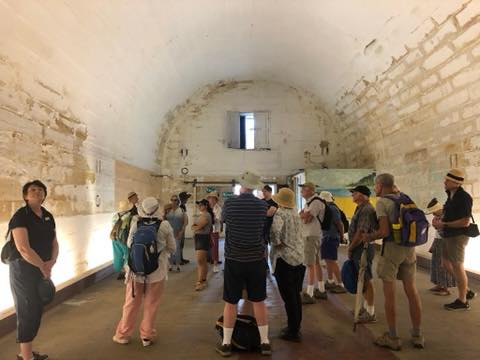 On Sunday 3rd November members of TDAI and their partners and friends joined a guided tour of Goat Island. Goat Island is the largest island in Sydney Harbour, lying to the west of the Harbour Bridge between Balmain and Millers Point. It is a sandstone outcrop and the island covers an area of 5.4 hectares

Its aboriginal name is Me-Mel and it was originally Bennelong’s home. It was later used as a place to store gunpowder. Convicts were used to clear the land and build the Queens magazine building. It later became the headquarters of the Sydney Harbour Trust and is now part of Sydney Harbour National Park.

We walked around the island learning about the history of the convict quarry, barrack buildings, the Queens Magazine where 300 barrels of gunpowder where held, first water police station and the harbour masters residence. We also went inside a remaining film set that was used for the TV series Water Rats.

The views back to the Opera House and Harbour Bridge as well as to the city and across to Balmain, North Sydney and Barangaroo were wonderful. You can book a place for New Years Eve there for about $800!

Thank you to Richard and the Social Committee for organising this tour.